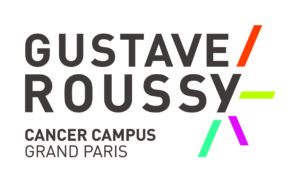 Filamin A (FLNa) links the cell membrane with the cytoskeleton and is central in several cellular processes. Heterozygous mutations in the X-linked FLNA gene are associated with a large spectrum of conditions called filaminopathies that include macrothrombocytopenia. Here we show, using an isogenic pluripotent stem cell model derived from patients, that the absence of the FLNa protein in megakaryocytes (MKs) leads to their incomplete maturation, and particularly the inability to produce proplatelets. The reduction in the proplatelet formation potential is associated with a defect in the acto-myosin contractility, due to inappropriate RhoA activation. This dysregulated RhoA activation was observed when MKs were plated on fibrinogen, but not on other matrices (fibronectin, vitronectin, collagen I and von Willebrand factor), strongly suggesting a role for the FLNa/αIIbβ3 interaction in down-regulation of RhoA activity. This was confirmed by experiments based on the overexpression of FLNa mutants deleted of the αIIbβ3-binding domain, and the RhoA-interacting domain respectively. Finally, pharmacological inhibition of the RhoA-associated kinase ROCK1/2 restored a normal phenotype and proplatelet formation. Overall, this work suggests a new etiology for macrothrombocytopenia, associating an increased RhoA activity with a disrupted FLNa/αIIbβ3 interaction.

This website uses cookies to improve your experience while you navigate through the website. Out of these, the cookies that are categorized as necessary are stored on your browser as they are essential for the working of basic functionalities of the website. We also use third-party cookies that help us analyze and understand how you use this website. These cookies will be stored in your browser only with your consent. You also have the option to opt-out of these cookies. But opting out of some of these cookies may affect your browsing experience.
Necessary Always Enabled
Necessary cookies are absolutely essential for the website to function properly. This category only includes cookies that ensures basic functionalities and security features of the website. These cookies do not store any personal information.
Non-necessary
Any cookies that may not be particularly necessary for the website to function and is used specifically to collect user personal data via analytics, ads, other embedded contents are termed as non-necessary cookies. It is mandatory to procure user consent prior to running these cookies on your website.
SAVE & ACCEPT